Miranda Rights: What are they? 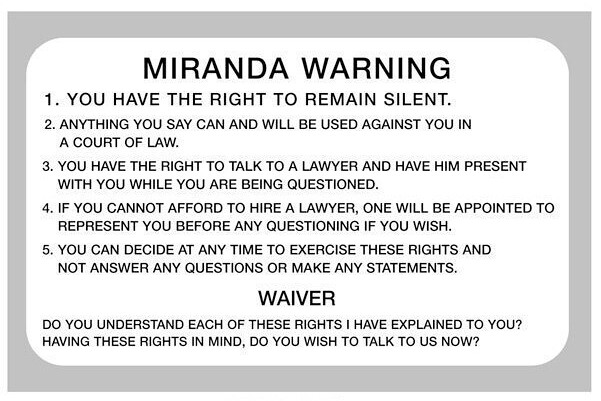 “You have the right to remain silent.  Anything you say, can and will be used against you in a court of law.”  Those of us who routinely watch police dramas know that individuals suspected of crimes have  “Miranda rights.”  Just hearing the phrase “Miranda rights” conjures up images of a police officer hauling away an individual in handcuffs or a defendant sweating in a dark interview room while being interrogated by a tired looking police detective.  While many people know the basics of Miranda, you may not know the historical evolution and the extent of Miranda rights.

Concerned by the techniques and practices law enforcement used in questioning and interrogating individuals in police custody in the mid-20th Century, the United States Supreme Court laid down the landmark opinion in Miranda v. Arizona in 1966.  Ultimately, the Court mandated the use of “procedural safeguards” to protect a defendant’s constitutional rights against compelled self-incrimination and right to counsel.  The “procedural safeguards” required that a criminal accused be informed of his right against self-incrimination (or to remain silent) as well as his right to counsel (or be appointed one in the proper case).  If a defendant was not advised of these rights, then any confession obtained as the result of questioning could not be used in the prosecution’s case.  In legal jargon, these “procedural safeguards” became known as Miranda rights, after the name of one of the criminal defendants in the landmark case, Ernesto Miranda.  Subsequent to the Miranda decision, police departments around the country began issuing cards specifically spelling out Miranda rights to their officers, to be read to individuals in police custody.

An individual’s Miranda rights encompass two basic constitutional rights: the right against compelled self-incrimination (often referred to as “pleading the Fifth”) and the right to counsel.  Once in police custody, an individual has both the right to not speak to police, as well as the right to request the presence and assistance of an attorney during any subsequent questioning.  It bears noting that Miranda rights only attach when an individual is both in police custody and is subject to interrogation or a similar adversarial questioning practice.  Many police-citizen encounters may involve one of these prongs or invoke a similar situation, but Miranda is not required.  For instance, police are generally not required to render Miranda warnings when asking simple questions, during basic traffic stops (for speeding, DUI, seatbelt violations) or immediately after arresting an individual if no interrogation or questioning is conducted.

As the Supreme Court recognized over fifty years ago in Miranda v. Arizona, knowledge of one’s constitutional rights during the criminal investigation and prosecution process is critically important.  If you are arrested or charged with a crime, know that the attorneys at Kane & Crowell Family Law Center are experienced in the criminal justice system and stand ready to protect your rights.  Call attorney Ashley Jackson at (615) 784-4801 for more information about legal representation in a criminal matter.

Tweet
Tags:
Criminal Law
Five tips for meeting with your attorney
Divorce: What To Expect

Ashley L. Jackson began practicing law in 2015. She received a Bachelor of Business Administration from Belmont University's College of Entertainment and Music Business in 2008. Upon graduation, Ashley began working for Warner Music Group in Nashville, Tennessee. Ashley began her law school career in 2010 at the Nashville School of Law, where she was the recipient of the Faculty and Trustee Scholarship for three consecutive years. Ashley received a Juris Doctor degree from the Nashville School of Law in 2014. She continued to work for Warner Music Group in the Business Affairs department until 2015.